NOTE:  A video of the meeting can be seen after this article.  Some video times are annotated within the article.

In keeping with the meeting’s theme Climate and Recycling, I proclaimed we should celebrate Earth Day every day and not just on April 22.  Climate change is endangering the Earth’s inhabitants and the need to put a stop to the earth’s rising temperatures is immediate.  Coincidentally, the PBS documentary drama, The Trick, recently premiered about the 2009 Climategate scandal, which  undermined the science of climate change.  It started with a hack into the computers of Professor Phil Jones and his team at the University of East Anglia three weeks before the UN Climate Change Conference in Copenhagen and resulted in a release of their emails.  The singular purpose of the hack was to cast doubt on Professor Jones’ “hockey stick” graph, which is a reconstruction of global temperature and shows the rise of global temperatures will decimate mankind if CO2 emissions are not curtailed.  Even though the debate over the science was eventually won, the impact on public opinion pushed back the fight against climate change by a decade, something we see way too often now.  Misinformation does impact public opinion and it’s so important to raise our voices to counteract it and broadcast the scientifically proven information.

6:43  April 24 is Armenian Genocide Remembrance Day and long-time PV Dems member Sheila Paypayans, who marched in one of the LA events, shared her reflection of this day with us:

On that day in 1915 the Ottoman empire started their genocide of the Armenian people by collecting and murdering all possible leaders.  From that day on they collected and marched the Armenian population from their ancestral home to the Syrian desert without food and water.  Along the way many women were raped or sold into slavery.  Many children were taken by people, renamed and forced to change religion.  In the end, 1.5 million Armenians were victims of genocide.  To this day Turkey denies that this happened.

7.44  CA Primary Election Ballots will be mailed on May 9 and Voting Drop Boxes will be open May 10.  Here’s a link to the LACDP Endorsements – https://www.lacdp.org/candidates.  To review all the candidates and measures on your ballot, go to votersedge.org, a comprehensive, nonpartisan online guide by MapLight and the League of Women Voters of California Education Fund, and type in your zip code.

Starting with the May meeting, we will resume in-person meetings at the Peninsula Center Library Community Room, 701 Silver Spur Rd, RHE.  To ensure COVID safety, we’re asking folks to wear a MASK.  Zoom access will also be provided for those who cannot attend in-person.

May 15, 2022 – Accelerating Conservation and Decelerating the Republicans

On the lawn of St Luke’s Presbyterian Church, 26825 Rolling Hills Rd, RHE, 5-7pm.  The event will include food and entertainment and a host of speakers.  Congressman Ted Lieu is confirmed to speak and provide his traditional oath of office for new board members

11:54  Connie Sullivan, PV Dems 1st VP, announced a fundraiser at her house for RPV City Council candidate Paul Seo.  Congressman Adam Schiff was slated to be there.  The initial date for the fundraiser was June 11, however, after the meeting she got news that Adam Schiff couldn’t make it and the date is now TBD.  If you would like to attend or donate, please contact Connie, pvedems@gmailcom, for the details.

13:52  Under actions for us to take, Caryl Schwartz, announced Phone Banking for Jay Chen to win the redistricted Congressional District 45 against incumbent Michelle Steel, whose voting record consistently supported Trump’s agenda 99% of the time.  For more information about Jay Chen, visit:  chenforcongress.com.  To join the phone banking for Jay Chen every Tuesday, 2:30 – 4:30 pm, in person or on Zoom, please register at ocdccc.us/isbla for the address or Zoom link.

22:05:  After our meeting’s business, Melissa Hammond, candidate for LA County Superior Court Judge seat 118, said hi to everyone and asked for our support.  All of her opponents are Democrats and she alas was not endorsed by the LACDP.  Our club doesn’t endorse candidates, but our bylaws stipulate that we support the endorsements of the LACDP.

Here is the PV Dems March Treasurers report from Treasurer Al Shadbourne:  (Please note:  the top donation went to Field Team 6, whose purpose is to register Democrats.  Our board felt this would be the best use of our money prior to the primary elections.) 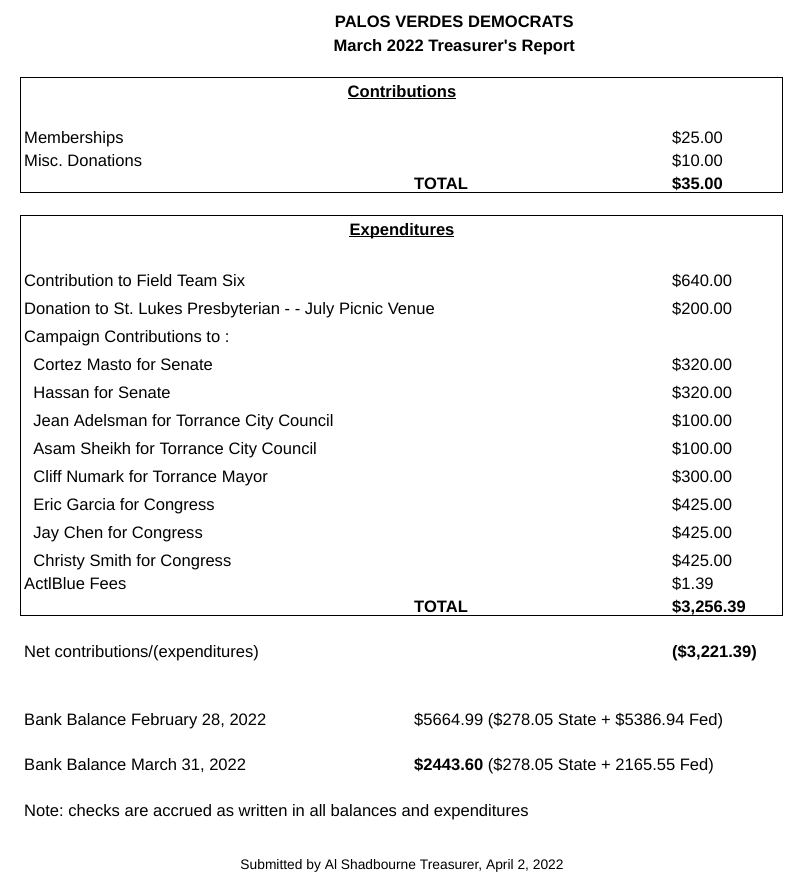