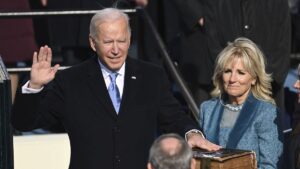 Currently, the president of the United States is (thankfully) Democrat Joe Biden.  President Biden replaces a twice impeached Donald Trump in a fierce election in which both candidates received more votes than any previous candidate in history.

His victory, coupled with a stunning sweep of the Georgia Senate races by Democrats Jon Ossoff and Rev. Raphael Warnock give Democrats control over both houses of Congress and the Executive Branch.  The last time that happened, President Obama passed the Affordable Care Act.  The time before, President Clinton passed a tax overhaul that resulted in 8 years of deficit reduction and 4 years of budget surpluses.  Both times, the Democrats lost full control of Congress in the next midterm election. Vice President Kamala Harris was serving her first term in the U.S. Senate when she was elected to her current position.