Convening in the shadow of disastrous climate related flooding in Pakistan, the UN annual Conference of the Parties (COP27) met in Sharm el-Sheikh, Egypt in November.  The Conference offered both hope and disappointment.

On the plus side, for the first time the parties agreed to funding for “loss and damage” to nations most affected by the Climate Crisis.  Though the term reparation was avoided, the intent was clear:  assist developing nations who have suffered from greenhouse gas emissions produced by the developed world.  The Conference reaffirmed its commitment to limit global temperature rise to 1.5 degrees Celsius.  Parties also agreed to halt forest loss and land degradation by 2030.  Eight European nations agreed to provide USD 105.6 M for low-lying and low-income countries.  Young people played a prominent role in the discussions.

Unlike the Trump years, the United States made several commitments.  It doubled its contribution to USD 100 M for the UN Adaptation Fund and pledged another USD 150 for adaptation in Africa.  Leveraging its position as a consumer, the US became the first national government to require major suppliers to set Paris Agreement reduction goals.

The major drawbacks were scale and lack of urgency.  Experts estimate it will require an annual investment of USD 4 – 6 T per year to transform the world economy to low carbon and reach net zero emissions by 2050.  No nation is close to this level of funding – the prior commitment of USD 100 B by the developed nations has not been fulfilled.  To limit the rise in global temperature to 1.5 degrees, a reduction of greenhouse gas emissions by 45% will be needed by 2030.

The conference also didn’t address how to drastically reduce current greenhouse gas emissions.   Present trends point to more emissions, not less, in the coming year.  China has ramped up its coal production.  Despite having the second largest economy and leading the world in manufacturing, China is classified as a developing nation.  The chief Chinese negotiator, Xie, placed the burden on greenhouse gas reduction on developed nations, not developing nations.   For its part, the US is facilitating short term oil drilling to lower gasoline prices.  Both China and the US are responding to domestic pressure at the expense of making the required sacrifice to limit global warming to 1.5 degrees.

All Californians will feel the impact of the Climate Crisis. 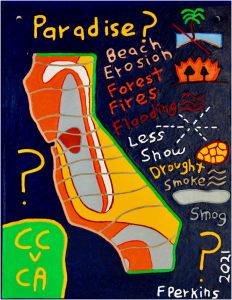