The Saffir-Simpson Hurricane Wind Scale classifies hurricanes by the maximum one-minute-average windspeed ten meters above the surface of either water or landfall.  The most intense hurricane winds occur adjacent to the eye, an area called the eyewall.  There are six categories;  Categories 3, 4 and 5 are described as major hurricanes.  This scale ignores storm surge and rainfall and considers only maximum windspeed.

High winds cause not only direct damage, but also storm surge which can be equally devastating.  Climate Change has raised ocean temperatures, leading to a domino effect:  higher water temperature > more hurricane energy > higher windspeeds > more direct wind damage and storm surge.  Combine rising sea level, also climate-change related, with a major hurricane during high tides and you have a “trifecta” of sorts for storm surge.

Climate Change impacts other hurricane factors.  As air temperature rises, the atmosphere holds more moisture, leading to torrential hurricane-related rainfall.  In 2017, Hurricane Harvey dumped 60” of rain on parts of Houston, leading to widespread flooding.  Paradoxically, while the maximum windspeed in hurricane eyewalls have increased, the speed at which hurricanes travel from point A to point B appears to have decreased…with catastrophic results.  The longer a hurricane lingers, the greater the overall devastation from wind damage, storm surge and torrential rainfall.  This paradox may be related to Climate Change.

Hurricanes also threaten the insurance, mortgage, and real estate markets.  The usual strategy relied on by casualty insurers is to retain enough cash reserves to pay out expected losses during the following year.  Florida insurers have a different strategy – they avoid large reserves, thereby keeping rates low, but rely on reinsurers for backup in the face of major losses.  According to a recent New York Times article by Christopher Flavelle, there are three major reinsurers, Lloyd’s of London, Munich Re and Swiss Re.  These three companies renegotiate rates with Florida insurers annually; as losses from Hurricane Ian balloon, they will either increase reinsurance rates, or exit the market entirely.  Instability in the Florida insurance market will hobble both mortgage lenders and the real estate market.  Other extreme weather events such as massive forest fires in California pose a similar risk – volatility in the insurance, mortgage, and real estate markets.

Florida is the Hurricane State and Connecticut is the Insurance State. 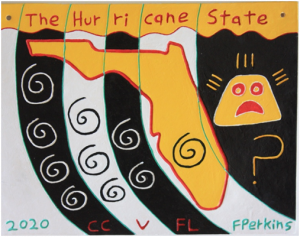