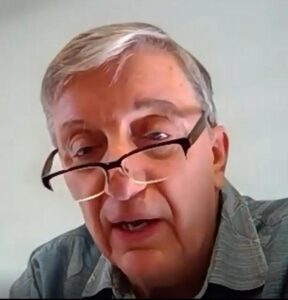 Palos Verdes Democrats met on August 21, 2022 to hear Superior Court Judge Tom Long’s commentary on the University of Irvine (UCI) Law review of the 2021-22 Supreme Court cases. This was their 12th annual review, taking place on July 6 of this year, and the UCI panel was moderated by Professor Michelle Goodwin.  Connie Sullivan, our Club President and program moderator, introduced Judge Long and shared the history of how the PV Dems tradition of showcasing the Supreme Court term in review began in 2014.

Editor’s Note:  To help the reader delve more deeply into the details of the presentation, we’ve annotated the time (e.g. 1:30 is 1 minute 30 seconds) that the discussion occurs in the video.  The video is provided at the end of this article.

02:32 In Erwin Chemerinsky’s opening remarks, he said that “the writing has been on the wall for a long time,” given what happened with Merrick Garland, the death of Justice Ruth Bader Ginsburg, and the appointment of three justices by Trump.  In this term the Supreme Court decided 60 cases, 19 were 6:3 decisions and 9 were 5:4 decisions, and in every major case the conservative position won, and the conservative justices moved the court very far to the right.

04:48 Michelle Goodwin discussed what we mean by conservative vs liberal and how it has changed.  Roe v. Wade was a 7:2 opinion, and five of the justices were appointed by republican presidents.

05:23 Erwin commented on this issue as well, pointing out that in the Planned Parenthood v. Casey 5:4 decision, all five of the justices in the majority were appointed by republican presidents.  The current court reflects how much the Republican Party has changed.  He said “If you want to understand this supreme court term, you look at the Republican platform.  These justices were about implementing the Republican platform into constitutional law.”

07:15 Aziza Ahmed commented on cases that addressed matters of Covid.  These cases are a story of the executive branch trying to take action and of the supreme court trying to undermine them. She said “The Roberts Court is interested in dismantling the administrative state.”

08:02 Aziza said the story of the Covid response really began in the previous year’s CDC eviction moratorium, in which the court said the CDC cannot implement this moratorium.

08:45 Aziza explains what the term Shadow Docket means – the cases that the court decides without engaging in fully.

10:28 Mark Joseph Stern shared his opinion that “the six conservative Supreme Court justices hate government that is working for the people.”  He talked about their extreme views of bureaucrats and the administrative state.

12:40 Aziza discussed the case of FDA v. ACOG, the court deferred to the FDA because they are essentially limiting access to abortion.

14:27 Judge Long says that the court is now making decisions that will make it difficult for the legislature to decide that we want to achieve a goal, such as reducing air pollution, but we want to delegate the decision to the EPA.

16:42 Erwin discussed the case of W. VA v. EPA, in which the court said that the EPA lacked authority under the statute and that “when there is a ‘major question,’ the Congress needs to give ‘specific guidance’.”  Supreme Court has opened the door to challenges to all aspects of the administrative state.  He thinks this reflects a pro-business agenda on the part of the Roberts Court.

19:10 Erwin discussed textualism versus originalism.  He said “Textualism relates to statutes, and it’s the view that the court should pay attention to the plain language of the statute and pay no attention to legislative history.  But this is problematic because the meaning of words is inherently ambiguous.  Originalism relates to constitutional interpretation, and the meaning of a constitutional provision is fixed when it’s adopted so it means the same thing today as when it was adopted.  But this is problematic because history is ambiguous, and the world has changed so much since the constitution was written.”

22:08 Judge Long commented that with the decision in New York Rifle & Pistol Association, Inc. (NYSRPA) v. Bruen, a 2022 case about gun rights under the Second Amendment, our most protected civil right is now our right to carry a gun.

23:16 Mary Anne Franks discussed the case of NYSRPA v. Bruen, in which the court said, in a 6:3 decision, that people in New York have a right to carry a gun outside the home.  The decisions seem to be based on fundamentalist interpretations of the Constitution.  Mark discussed the cherry picking of history that the justices use to make arguments, and Mary Ziegler discussed the goldilocks approach to the use of history.

Erwin says “this is the first time the supreme court has used originalism to limit a right.”

35:44 Judge Long commented on the discrepancy in Bruen; in particular, that the allowable regulation of guns will be only what was allowed when the second amendment was adopted, but that the allowable weaponry will be whatever is in common use.  He also discusses precedence and asks if any future liberal majority will have respect for precedence, given how the current court is ruling.

Question:  Does Thomas’ ‘common use’ comment mean that the Congress will not be able to pass an assault weapons ban?

Judge Long:  “It’s a horrifying thought.”  In the past, he would have said yes, but now he doesn’t know.

39:38 Judge Long asks audience, while watching Dobbs, “to ponder the outcome if we were dealing with a ruling that required men to become involuntary parents.  What would the treatment be then?”

40:28 Regina Mahone began the discussion of the case of Dobbs v. Jackson Women’s Health Organization, followed by Mary Ziegler’s discussion of the work done by the majority.  First, Mary expressed frustration about the historians who were cited by the majority.  Mary mentioned the viability issue and how surprised legal experts were that this particular case went before the supreme court. Regina mentioned that Roberts didn’t support the total overturning of Roe.  Aziza discussed the dissent to the majority opinion, citing Kavanaugh’s claim that the court was taking a neutral position by just sending it back to the states to decide.  Aziza said “The dissent also calls out that if we’re going to go back to the founding of the country, we have to look at who was in power and who was benefiting from the laws at that time.”  Mary discussed the concept of coverture – that a married woman’s legal existence was considered to be merged with that of her husband, so that she had no independent legal existence of her own.  Erwin said that “the question of abortion is who should decide before viability whether a woman can have an abortion.  Should the woman or the state decide?  The majority decided the state should decide and they gave two reasons.  First, that the fetus is a potential life, and second, that the only rights protected by the constitution are those in the text, or part of the original meaning, or those with a long history or tradition.”  Erwin said we’ll see states adopting laws restricting reproductive health.  He also said the criteria the majority gave for the right to contraception and a right to marriage equality don’t exist anymore; moreover, the majority doesn’t have respect for precedence.  Mary discusses the reason that she doesn’t trust Alito saying that other rights are safe.  Regina brought up the 1970 Slack v. Secretary of Defense case about a pregnant woman in the Air Force who fought to be allowed to carry her child, but the military discharged women for becoming mothers.  Women had to choose to give up their job or get an abortion from a military doctor.  Ruth Bader Ginsburg argued the case for Susan Struck.  [Editor’s Note:  This entire discussion about Dobbs is worth watching!]

1:07:09 Judge Long commented that “the most dangerous fallout from the Dobbs decision is the concept of personhood for the embryo from the moment of conception.”  This would mean that abortions would be unconstitutional everywhere in the country.

1:08:21 In discussing criminal justice cases, Erwin discussed the Vega v. Tekoh case, decided 6:3 for the conservative majority, which limits Miranda requirements in civil suits and may open the door to eliminating Miranda.  Mark said this is a very important case that shows how the court is teeing up cases for future decisions.  Mary sees Vega in concert with Texas SB8, a decision passed 8:1 by the Texas Supreme Court.  Even if you have a right, the court is eliminating constitutional remedies.

1:18:15 Michelle Goodwin asked each speaker to articulate a silver lining to this supreme court term. Mary Ann said that we all have to remember about civil disobedience, and “we have to be as uncompromising about justice as the justices are compromised by power.”  Regina encouraged everyone to remember the work of activists, and to get out there and take action.  Mark said his “silver lining is Katanji Brown Jackson.”  Aziza sees many of our institutional structures losing legitimacy, so maybe the supreme court is next.  Mary reminded us that our rights never came from the supreme court. Erwin cited MLK Jr’s quote that “the arc of the moral universe is long, but it bends toward justice.”  Erwin believes that at some point Dobbs will be overturned, but only if we all do our part. Michelle also cited MLK Jr.  She said that when he was asked why he was interested in women’s reproductive health, environmental justice, and workers, he said, “Because I refuse to segregate my moral concerns.”

1:22:55 Question:  If all people are seen as equal under our Constitution, why can’t we devise ways to make men bear as much of the burden of pregnancy and childbearing, such as financial support and perhaps sterilization?

Judge Long:  Sterilization could be a problem, but perhaps the other ones can be addressed by statute.  This court seems interested in their own agenda.

1:24:36 Question:  Can you discuss Church and State decisions?

Judge Long:  The football decision was addressed.  He thinks “we seem to be headed toward a situation where the wall between church and state may end up as a picket fence, with much of the fence missing.”  Assertions of religious beliefs will be a way for you to argue that you can say I don’t want to do business with various individuals or groups of people.  He said “this area of the law is a complete mess.”

1:26:33 Question:  It’s my sense that the original documents of our country do not mention women at all.  I’m concerned that this court will continue to take rights away from women.

Judge Long:  The failure to pass the Equal Rights Amendment in the 70s is problematic, because statutes are not infallible.  There still is no constitutional right to equality for women, and there is no tradition of rights for women, besides the right to vote.

1:29:30 Question:  I assume most Americans are not happy with what this court is doing.  What will it be like for judges who will have to deal with any of these issues?

1:32:37 Reggie showed the poster from the PV Democrats table at the RPV July 4th Celebration.  It showed that people commented on being concerned the most about the supreme court, as well as by abortion rights, democracy, and gun control.

1:33:54 Connie said her silver lining is that perhaps the supreme court may not continue down this road, if there is a huge backlash.  Judge Long commented that “if you look at the history of the court, in general the supreme court justices, both the most liberal conservatives and most liberal, tend to drift to the left as they age.”  He’s “skeptical, but there is no reason not to hope.”