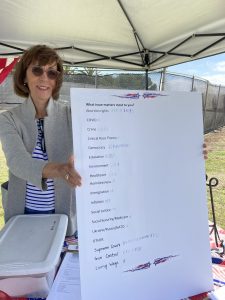 Last 4th of July, the PV Democrats hosted our traditional table at the Rancho Palos Verdes celebration at the City Hall.  This year, the table was located near the entrance to the park, and we had quite a few visitors and signups for our mailing list.  The table featured Fraser’s spinning roulette wheel, which gave visitors a chance to see what would happen in the event of a Republican or Democratic victory in the upcoming midterm election.  While this feature attracted many youngsters, adults took an opportunity to vote on our ballot to identify the #1 issue facing voters.  Democrats got to vote using a blue pen, No Party Preference voters used a green pen, and a single Republican voter had the courage to come visit and cast his vote.  Thanks to our newly minted Club President, Connie, for coming up with this idea.

The results of the election were:

Clearly, most visitors are concerned about the direction of the Supreme Court.