The Palos Verdes Democrats gathered in person for the 2022 annual picnic at St. Luke’s Presbyterian Church on Sunday, July 17.  We had entertainment and a full line-up of speakers from local, county and state government.  Ann Nye, PV Dems 2nd VP, emceed the event.

Editor’s Note:  The video of the picnic is provided at the end of this article.  The start time for each speaker in the video is annotated before their name.  Checkout photos of the picnic in our photo gallery.

Entertainment for the picnic was provided by Jordan Bush playing on banjo, which you can hear in the opening sequence to the video below.  Jordan, a local Peninsula High graduate, also plays at the Peninsula Farmers’ Market on Sundays.  The Bubbles Man, John Mattson, generated big bubbles that flew across the grass for all to enjoy – especially the kids who ran around to pop them.

06:26  Supervisor Janice Hahn, now in her 2nd term representing LA County’s 4th District, spoke about the recent Supreme Court decision overturning Roe, GOP and Joe Manchin blocking attempts to address climate change, her recent push to launch 988, the new Mental Health Hotline in LA County, and the return of Bruce’s Beach in Manhattan Beach to heirs of the original owners.  [Editor’s Note:  there was a ceremony in Manhattan Beach on Jan 20, 2022 to officially hand over the deed]

17:14  PVE Mayor Pro Tem Jim Roos, whose term expires 2024, could not attend today.  PVE City Council has 3 seats up for election in November.

26:02  Steve Perestam, Candidate for RPV City Council is the independent candidate running in this race. 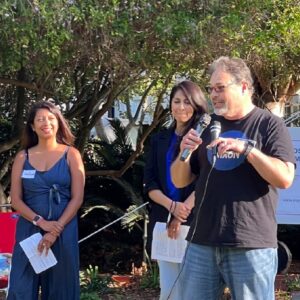 28:11  PVPUSD Board Member Rick Phillips, wearing an Impeach Nixon t-shirt, thanked the PV Dems for inviting him back the third time to the picnic, and encouraged everyone to vote for Ami Gandhi and Sara Deen for PVPUSD Board in November.  [Editor’s Note:  Rick is still considering whether he will run for re-election.]  Rick thanked Al Muratsuchi and Ben Allen for sending a “ton of money” our way so that “we now have a balanced budget for the first time since I’ve been on the board.”

30:46  PVPUSD Board Member and Candidate for Re-Election Ami Gandhi , who spoke at our picnic last year when kids were not able to go to school, was proud to say students were back to school for the entire year and that the district increased counseling and offered free tutoring for all students to address learning loss during the pandemic.  PVPUSD is ranked number one in the South Bay.  Go to gandhi4pv.com  to support Ami for PVPUSD Board this November.

33:36 PVPUSD Board Candidate Sara Deen spoke about mental health challenges in our local schools, saying, “our school district really is facing an existential crisis.”  Go to drsaradeen to support Sara for PVPUSD Board this November.

39:01  LA County Sheriff Candidate Robert Luna, former Long Beach Police Chief,  said he represents a change from the current sheriff’s dysfunction.  Growing up in unincorporated East LA and not speaking English until he went to school, Luna said his journey took him to Long Beach where he spent 36 years on various assignments with the LBPD.  Luna spoke about his vision for the sheriff’s department and 21st century policing that is focused on forward thinking.  Support Robert Luna for Sheriff at lunaforsheriff.com.

41:30  LA City Council District 15 Candidate Tim McOsker spoke about why Los Angeles County Democratic Party Vice Chair Sergio Carrillo couldn’t attend the picnic, and about his run-off election in November. Tim announced Sergio had to fly to Mexico City at the last minute due to the death of his cousin.  Tim wished him the best and said, “we want him back because he’s our LACDP Vice Chair, and I want him back because he’s actually my campaign manager.”  [Editor’s Note:  District 15 serves San Pedro, Wilmington, Harbor City, Harbor Gateway and Watts.]  Janice Hahn used to serve this district and has endorsed Tim McOsker.  Tim said, “We are living in a time when democracy is under attack.”  Support Tim McOsker for LA CD15 at timmccosker.com

45:30  LA Superior Court Judge Candidate Melissa Hammond – Seat 118 discussed her unique work experience that makes her very qualified for this position and earned the endorsement from the LA Times and received a Well Qualified rating from LA County Bar Association, the highest rating one can get.  Melissa has been a Deputy District Attorney for over 14 years, a Public Defender and a civil litigator.  “It’s really important to make sure there are well qualified judges on the bench … who know how to balance the public safety, and the victim’s rights against the rights of the accused.”

49:27  Introduction of three other candidates running for judgeships:

51:02  Jeanie Le, representing CA Congressional District 45 Candidate Jay Chen, spoke briefly about why Michelle Steel needs to be beat in November and about why Jay Chen is the best candidate. Jay Chen campaign volunteer and PV Dems Activist Chair Caryl Schwartz talked about ways for us to volunteer.  Here’s a link to see how you can volunteer – jaychen.us/volunteer

56:39  LA County Assessor Jeffrey Prang won his June 7 primary, with over 50% of the vote (50.15% to be exact), so he does not have to run again in November. Prang spoke about his role as assessor and how the completed annual assessor roll and property values increased over 6%.  He is most proud of developing a new program last Fall with local community colleges so the colleges can provide training for new potential real-estate appraisers for the Assessor’s office.  Here’s a link to the Assessor’s website.

1:01.03  Assemblymember Al Muratsuchi, 66th Assembly District spoke about the importance of the PV Dems Club, and the importance of elections, from local cities and school boards all the way up to the national elections.  He supports Ami Gandhi and Sara Deen, and he is hoping Rick Phillips runs again. His new assembly district now includes El Segundo and half of San Pedro, and he is no longer representing Harbor City and Harbor Gateway. He also lauded California as a leader in many areas; encouraged everyone to vote for Proposition 1 in November, which would enshrine a woman’s right to choose in the California Constitution, recognized the state’s leadership in promoting commonsense gun safety laws, and fighting the climate crisis.  In the last primary, he was proud to have finally won a majority in three of the four Peninsula cities. That’s progress!

1:10:12  Assemblymember Al Muratsuchi introduced the PV Democrats officers and board members for the 2022-2023 year and provided the oath of office.  The list of the new board members may be viewed on our website. 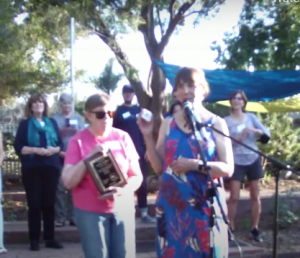 1:12:47  Incoming PV Democrats President Connie Sullivan presented a plaque and gift card to outgoing President Kathy Bradford.  She briefly mentioned her vision for the coming year:  New Activism Chair on the Board, and encouraging activism among club members, supporting local elections, as well as other important elections in the state.