In the spring of 2020, we nicknamed it “the happy house”– a front lawn filled with blooming wildflowers, mixed with garden spikes of colorful spinning petals; a peace sign over the front door; and, a filled doggie water bowl on the grass near the street.

Before the pandemic, my daily walks took me to the beach.  During 2020, however, the beach walk was sometimes barricaded or off-limits, so I found myself rerouting my walk inland, which often included a path down South Broadway.

What first began as a friendly wave eventually gave way to my learning John Fortier’s name and lawn-chair conversations with him that were sometimes loud, over masks, neighbors’ lawn mowers, and the mandatory six plus feet distance.  As time went on, I learned that John had been an educator, a veteran of the Air Force, and a staunch Democrat.  Looking back, I regret now that so much of our subsequent conversations were monopolized by the latest antics of ‘the former guy’.

As time passed, and restrictions at the beach relaxed, I went back to my scenic walks along the ocean.

Fast forward to August of this year, when I purchased a NO RECALL sign from our PV Dems.  After checking the HOA’s CC&Rs and finding no language prohibiting political signs (or any other signs for that matter), and informing the two-person HOA board, I planted the NO RECALL sign on the front lawn.  Keep in mind that I’ve lived in this townhome on a fairly well-traveled corner of South Broadway for over 15 years.

It wasn’t long before I received multiple negative emails, and also verbal reprimands (in a chance meeting at the mailbox, for example) from the HOA board.  Though I am not accusing anyone, as I do not know, nor do I have any proof, it was less than 2 weeks later that the sign disappeared.  Not to be deterred, I ordered more signs.  I put up a 2nd sign, and 1 week later, gone. 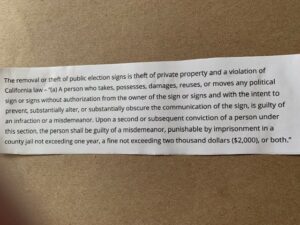 It was when Tony Hale, Beach Cities Democrats President, delivered the 3rd sign, that he shared a great suggestion, “Some people had luck in keeping their signs by attaching a copy of the ‘election-sign-stealing’ law to a leg of the sign.”  Like magic, the 3rd sign (with consequences of stealing an election sign paper attached) survived until Newsom’s overwhelming win.

Also during this NO RECALL election period, I began canvassing with door hangers and some door knocks in PV, Torrance, and also my neighborhood.  Around the same time as the 2nd sign disappearance, when I was canvassing South Broadway, I arrived back at John’s house.  Immediately, I noticed a difference:  no peace sign and no spinning flowers.  I walked up to the door and knocked…no answer.  I left a door hanger and continued up the street.

When I returned home, and after doing some searching, I was amazed to learn of John’s history of activism. But more importantly, I learned what I dreaded most:  John had passed away only 4 months ago, in May of 2021.

Though I had many thoughts of giving-up and giving-in on the yard sign, the importance of this election grew daily.  After learning of John’s lifelong activism, it was thoughts of his devotion to issues he cared about that gave me a push to keep on.  And, when another acquaintance/new neighbor from canvassing, Holly, shared that she did a ‘fist pump, yeah!’ when she saw my sign, that was added encouragement that what we were doing for this election did matter.

Recently, I knocked on John’s door again, this time to express my condolences to his wife, Michele.  After inviting me in, she told me more about their life, their family, and John’s passing in May.  Before I left, I shared with her some brief details of canvassing and the disappearing signs, and she was moved that John’s activism gave me incentive to get through this election.

Last Tuesday night (Sept 14), we were all so relieved that our efforts led to a Newsom victory!  And, going forward, I plan to keep memories of John’s lifelong activism in reserve for the many protests and elections ahead.

The ‘doggie bowl’ photo was taken when I went back to visit Mrs. Fortier (Michelle).