By Ann Nye and  Fraser Perkins —

Palos Verdes Democrats met by Zoom on September 19th to focus on community groups making a difference.  Moderated by Ann Nye, the meeting featured presentations by Amardeep Gill, Director of the Los Angeles Alliance for a New Economy (LAANE) Campaign for a Fair Workweek, Rachel Torres of the United Food and Commercial Workers (UFCW) Local 770, and Nia Liggins, an intern with the Torrance Refinery Action Alliance (TRAA). 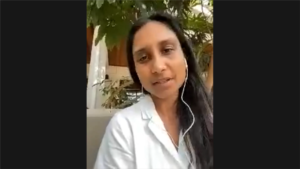 Amardeep Gill, began her talk by outlining the background of LAANE’s “Our People Our Port” campaign, a report she presented to our club two years ago.  This campaign, one of LAANE’s longest, started thirteen years ago and now includes a blend of environmental justice and community groups.  The Campaign seeks to reduce air pollution and protect workers within the port.  A major issue has been the classification of truck drivers by trucking companies as independent contractors as opposed to employees.  The following three port bills, supported by PV Dems, are either pending or have been passed by the state legislature and are awaiting Governor Newsom’s signature:

In response to a question about why the ships were backed-up in the harbor, Gill said she believed this resulted from the pandemic, a backlog of orders, and a large volume of shipping material.

Gill said the Fair Workweek LA (FWWLA) coalition encompasses the CVS Contract Fight and the American Rescue Plan.  LAANE and UFCW Local 770, said Gil, have been working together on this for over a decade.  UFCW Local 770 represents grocery and retail employees, the second largest employee group in both the City and County of Los Angeles.  The FWWLA coalition came together because UFCW Local 770 wanted to “concretely raise job standards for both union and non-union workers.”  Remembering her experience working in retail, Gil said retail workers were routinely subjected to unpredictable hours and wages which eroded their quality of life.  She added, because most workers were women, women of color, and parents, their quality of life was impacted the most.

FWWLA found the pandemic has savaged retail and grocery workers:

Gill reported victories won by grocery and retail workers at the city, county and state level, including such benefits as hazard and hero pay, workers’ compensation for Covid-19, and childcare access.  Gill finished her presentation by explaining LAANE’s support for the CVS Contract Fight.  The CVS workers began their contract negotiation in June 2021, focused on better wages, safety standards, security and affordable healthcare.  She noted CVS likes to think of themselves as a health provider and a place where people go for their vaccine shots and Covid tests, yet they failed to provide a proper health care plan for their workers.  To support the workers and exert pressure on CVS, the coalition has planned boycott actions at selected CVS stores.  Their first boycott was scheduled for 10 am to noon on Friday, Sept 24th at the flagship store in West Hollywood.  Gil invited PV Dems to participate in future actions and will provide us with boycott information. 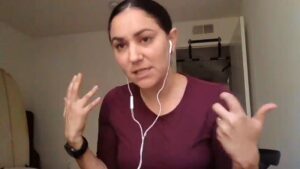 After recognizing Hanna Franco, an LACDP Fellow, who made the initial outreach to the PV Dems, Rachel Torres, UFCW Local 770 representative, expressed admiration for the dispersal of funds outlined in Biden’s American Recovery Plan Act (ARPA) and felt it was great that grocery and drug retail workers were deemed essential workers.  Yet, Torres added, “being deemed essential had a cost to it.”  As essential workers, they couldn’t work remotely, they couldn’t seek unemployment, and they lacked the training that other essential workers (like doctors, nurses, fire fighters) routinely received.  Early in the pandemic, workers were told not to wear masks as it scared customers.  She added, “workers literally had no masks and there was no social distancing,” causing worker’s infection rates to spike.  “To get employees to come to work, the companies initially provided incentive pay of an extra $2 per/hour,” but then rescinded this increase in late May 2020, saying, “we’re past the hazard.”  Torres noted we knew this wasn’t the case and grocery workers were at risk as they served the public.  Nineteen months later, Torres said that over 6000 of their union members had been infected with Covid-19, and over fifteen union members had passed away.  The FWWLA coalition wants cities to distribute ARPA funds at their disposal to essential workers such as grocery and retail workers.  The coalition also requested PV Dems to endorse the Coalition’s campaign.  [Editor’s Note:  the PV Dems Board voted to endorse this campaign for the ARPA allocation of funds to grocery and drug retail workers.  The board also added PV Dems to the letter sent to local cities.]  Here’s a link to LAANE’s Fair Workweek LA campaign – https://laane.org/blog/campaigns/grocery-retail/ 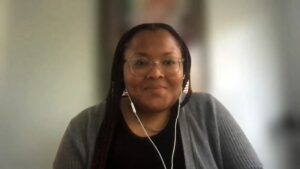 Nia Liggins, an intern with the Torrance Refinery Action Alliance (TRAA), reflected on why she’s so passionate about working with TRAA since she was a senior at Bishop Montgomery High School in Torrance when the Torrance Refinery explosion happened on February 18, 2015 and spewed ash everywhere.  Liggins focused her remarks on TRAA’s progress to eliminate and replace the hazardous chemical, HF (Hydrofluoric acid) at the Torrance and Wilmington refineries.  TRAA, a local grassroots organization, has spearheaded the effort to force local refineries, at not only the local level, but also at the state and national levels, to transition away from HF use.  They have advocated to the EPA to reclassify HF as a hazardous material.  Of particular concern is the risk of earthquakes, potentially causing a refinery to release HF into surrounding communities.  TRAA will be active in the upcoming Torrance City Council and mayoral race by advocating for the candidates to make HF a major campaign issue.  TRAA rep Jane Alfonso, noted that Torrance has lied in the past about the danger HF poses to their residents.  TRAA has been active at the EPA listening sessions on a new rule governing hazardous chemicals, where nearly twenty people spoke about the dangers of HF.  TRAA submitted a rule amendment to the EPA covering HF and is working with 40 communities across the country to remove HF from their refineries.  Liggins encouraged Club members to become active with TRAA, adding that monetary contributions were always welcome.  Check out the TRAA website at https://traa.website/