The Palos Verdes Democrats gathered in person for the 2021 annual picnic at St. Luke’s Presbyterian Church on Sunday, July 18.  It was exciting for everyone to reconnect in person, after a year of Zoom meetings, texting and emails!  We had a full line-up of speakers from local government as well as our Congressman, Ted Lieu.  Ann Nye, PV Dems 2nd VP, emceed the event.

Editor’s Note:  The video of the picnic is provided at the end of this article.  The start time for each speaker in the video is annotated before their name.  Checkout photos of the picnic in our photo gallery.

2:00  Former CA 48th District Congressman Harley Rouda
Former Congressman Harley Rouda defeated Dana Rohrabacher in 2018 to serve as the Representative of CAs 48th congressional district.  However, he lost his re-election to Republican challenger Orange County supervisor Michelle Steel in 2020 in a very close election.  He’s now running against Steel in 2022.  In his view, the biggest asset Democrats have is the ability to organize, mobilize and turn out voters.  He noted that two-thirds of Republicans voted against certifying the election of Joe Biden as President following the 2020 election.  Rouda continued by presenting a scenario where Republicans, should they become the majority party, would not only try to suppress the vote in 2024, but also attempt to send their own electors against the will of the people, and we end up with Trump as President in 2024.  For this reason, retaining control of the House in 2022 is crucial, yet Democrats face daunting odds because of redistricting and the traditional loss of seats by the incumbent president’s party.  He implored club members to contribute to his campaign and come down to Orange County and “knock on doors.”  To donate or volunteer, go to https://harleyforcongress.com/

Mayor Alegria believes cooperation among the Peninsula cities is an asset for the entire Palos Verdes community.

11:55  Torrance Mayoral Candidate Cliff Numark
Cliff Numark, a former Torrance City Council member and current El Camino College Trustee, is running to become the next Mayor of Torrance in the June 2022 election.  He believes diversity within the city is a key to future success.  He cited finances, sustainability, schools and housing as major challenges facing the City of Torrance.  Numark has volunteered not only on behalf of the city, but also for seniors and students.  The voter registration distribution – 40% Democrats, 30% Republican and 30% no party preference – remains a challenge for Democrats.  Numark closed by urging Torrance residents to “make their mark for Numark” and check out his website at https://www.cliffnumark.com/

Editor’s Note:  At its July 13 meeting, the Torrance City Council considered who will fill the vacant position left by former Councilman Tim Goodrich for the remainder of his term.  If they cannot reach consensus by July 30, then they will hold a special election.  Goodrich announced his resignation May 18, citing a job promotion at work as his reason for stepping down.  Meanwhile, Torrance is transitioning to representation by district.  Districts 2, 4 and 6 were decided in the March 2020 election and Districts 1, 3, and 5 will be decided in the 2022 election.

Editor’s Note:  Megan Crawford was not feeling well and could not attend our picnic.

PVPUSD Board Member Ami Gandhi, appointed in May 2021 following the death of Jeff Frankel, is motivated by her two young children and the desire to make PV schools the best.  She noted that in-person instruction will resume this fall.

PVPUSD Board Member Rick Phillips reported that during the past year, the school district provided different educational options for families.  When schools reopen this fall, the district will require masks for indoor instruction.  State and federal officials have provided one-time money for testing and helping students catch up to where they need to be.

Editor’s Note:  RHE Mayor Steve Zuckerman had a family issue and could not attend our picnic.

Councilmember Debby Stegura, serving her first year on the RHE City Council, zeroed in on housing.  She reviewed the state’s desire to take control of local zoning to facilitate more housing.  SB 9 would allow owners to subdivide existing lots and construct duplexes.  She, along with most other South Bay elected officials including the RHE City Council, opposes this “one size fits all” approach to homelessness.  She added that the city needs to control local zoning in order to protect residents during emergencies such as fires.  Stegura lauded Assemblymember Muratsuchi and Senator Allen for their creative approaches to housing.  She applauded the City of RHE for celebrating the month of June as LGBTQ Pride Month.

PVLD Trustee Rosa Easton updated us on the status of the Library District.  The library closed its doors in March 2020 and reopened in June 2021.  The hours of service have been expanded.  The Library resumed passport services and has embarked on a program to stabilize financial resources.  It recently refinanced a six-million-dollar pension liability.  In the works is a 1400 square foot Teen Annex to be built on the Peninsula Library’s upper parking lot .

PVLD Trustee Zoe Unno, a recently elected trustee, highlighted the library’s DEI (Diversity, Equity and Inclusion) Program and the B.U.I.L.D. (Building, Understanding, Informing, Leading, and Developing) Team, which fosters an inclusive environment for staff and the community.  The library’s DEI Program has promoted the PVPUSD’s program for parents, Talking to Your Child About Race and Racism, and BUILD programs focusing on equity and diversity including race, ethnicity, gender, sexual orientation, ability, and religion.  Unno noted that while the past year has been tough, Governor Newsom worked to provide additional funds for library districts.

40:34  Water Replenishment District, District 2 Director Rob Katherman
WRD District 2 Director Rob Katherman reported progress on the road toward water self-sufficiency.  The WRD provides ground water for a 400 square mile area of southern Los Angeles County containing 4 million people.  It also protects our local aquifer from salt-water intrusion by injecting 18 million gallons of fresh water per day into a protective barrier.  Despite the current once-in-a-thousand-year mega-drought, ground water provides half of our drinking water.  The WRD, the largest groundwater agency in California, also contracts with Metropolitan Water District for imported water.  The WRD completed the Pico Rivera Project which increases recycled water as a source of aquifer replenishment.  Katherman gave out FREE ‘WRD Our Road to Water Independence – Celebrating 60 Years in Service’ brochures and metal straws with a straw brush cleaner, which were greatly enjoyed by our picnickers.

46:01  West Basin Municipal Water District Board of Directors President Harold Williams
Harold Williams is the District 1 Representative of the West Basin Municipal Water District, which includes the Peninsula cities, Carson and unincorporated LA County areas of Rancho Dominguez.  The West Basin MWD is the wholesale water agency that provides imported water to suppliers such as the WRD.  Williams says their investment in water conservation projects and recycling will ensure our area always has drinking water.  By investing in technology and innovation over the past 25 years, the West Basin MWD has recycled nearly 250 billion gallons of water.  A conservation program of special interest to Peninsula residents is the Grass Replacement Project which pays qualified homeowners $3/square foot of lawn replaced with approved California native plants.  Williams announced West Basin’s first project to pipe recycled water to the Peninsula and credited the PVE golf club as the prime mover behind this project that kept it going.  Williams suggested you visit their website at westbasin.org for more information.

53:47  Los Angeles County Property Tax Assessor Jeffrey Prang
LA County Assessor Jeff Prang provided a snapshot of the Assessor’s Office.  His job is not to collect taxes, but rather to assess the value of property within the county.  Prang thanked the Club for inviting so many local officials, who do such important work for the community, and not just the big “glamour offices.”  As property taxes are the essential revenue source for local services, the Assessor provides a foundational service.  His office has invested 100 million dollars in technology to provide an accurate annual assessment roll.  The office also works with homeowners, seniors, veterans and nonprofits to ensure that these entities don’t overpay property taxes.  He concluded by noting that over the past year, property values have increased by 3.7% and home values by nearly 20%.  Prang’s office provided certificates to each of the PV Democrats board members.

58:58  Torrance Unified School District President Betty Lieu
Two of the top priorities of TUSD President Betty Lieu have been school safety and mental health.  She said the past year of social isolation has been difficult for all students, but especially for elementary age children who have been deprived of developing social skills.  The TUSD was the first major school district in LA County to reopen; it did this in a graduated fashion starting with pre-K/K and progressing up through the secondary grades.

1:05:10  Los Angeles County Democratic Party Vice Chair Sergio Carrillo
LACDP Vice Chair Sergio Carrillo offered a big shout-out to members of local school board members who had one of the toughest jobs during the COVID crisis keeping our kids safe.  He congratulated California Democrats for making 38% of the phone calls to battleground states prior to the 2020 election.  He cast the current recall effort as an effort led by QAnon and Trump supporters and urged Democrats to oppose the recall election on Sept 14.  Carrillo said, “we need to give the biggest defeat to this recall so it doesn’t happen again.”

The high point of the meeting was a review of congressional legislation given by Congressman Ted Lieu, including:

Representative Lieu concluded by saying the challenge next year is to prevent the House from flipping to Republican control.  Keep up with Representative Lieu’s work by following him on Twitter, Instagram and Facebook and receiving his weekly email, The Lieu Review.

Following Representative Lieu’s presentation, he administered the oath of office to the 2021-2022 Palos Verdes Democrats Board Members to officially install them in office: 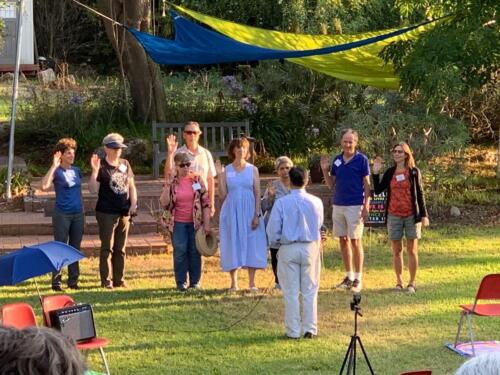 Editor’s Note:  Irene Silver and Al Shadbourne were unable to attend the picnic and were not present for the swearing-in ceremony.