At our May monthly meeting, the necessary changes we made in February to the Club Bylaws, and discussed in the March Newsletter, were approved by a vote of the membership:  53 FOR and 1 AGAINST.  The amended Bylaws are posted on our website under Club Info/Club Bylaws and Resolutions.

In addition to several minor changes, we added two addendums to our Bylaws as required by our chartering organization, the Los Angeles California Democratic Party (LACDP).  One is a policy to have a goal of no discrimination, harassment, or violence in our club proceedings.  The second is a Grievance Policy that enables a member to file a grievance against the board of directors with an independent committee made up of three non-board members.  Members Lynn Bommer, Gary Boston, and Tex Yamada graciously accepted my invitation to join the Grievance Committee.  I want to thank them for taking on this responsibility, though we all hope that it is never needed.  Once they select a chairperson, that email address will be posted on our website, under Club Info, to receive any grievances that may occur in the next year.

Early in May, after a request by the SEIU (Service Employees International Union) to sign their United Healthcare Workers West petition in support of Al Muratsuchi’s Assembly Bill 650 (AB 650 – the Health Care Worker Recognition and Retention Act), the PV Dems Board voted to endorse AB 650.  AB 650 will recognize the heroic efforts of health care workers during the COVID-19 pandemic by requiring private sector health care companies such as hospitals, nursing homes, and medical groups to provide bonuses to their employees.  This bill will provide substantial, tangible proof to health care workers that we recognize their sacrifice and value their work to care for our families and communities, both during the COVID-19 pandemic and into the future.  The bill is currently being evaluated and considered by the California Assembly Appropriations Committee. 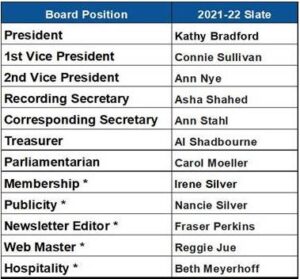 At our May 16 meeting, the PV Dems Board for 2021-2022 was elected, and will be installed in July by Congressman Lieu at our annual picnic meeting. There are two new members of the board: Beth Myerhoff who will be the chair of the hospitality committee when we resume in-person meetings and Ann Stahl, as corresponding secretary.

Our July 18 picnic will be our first live, in-person event this year. It will be held on the grounds of St. Luke’s Presbyterian Church on Rolling Hills Road in Rolling Hills Estates starting at 5:00 pm and ending at 7:00 pm.  More news to come soon.  We hope to start in-person club meetings at the Peninsula Library on Deep Valley Drive in August or September, subject to the library’s COVID restrictions.  Once we begin in-person meetings, we will continue to offer remote viewing access via Zoom as well.

South Coast Air Quality Management District (SCAQMD) voted to implement what are called “warehouse rules,” that would curb diesel emissions from thousands of trucks that ferry goods from the growing number of massive warehouses in the region and the ports.  Areas around the facilities have weathered increased pollution affecting largely minority communities.  SCAQMD officials acted to meet federal smog-reduction deadlines in 2023 and 2031.  The rules institute a points-based system requiring about 3,000 distribution centers to choose from a menu of options to reduce or offset emissions.  Those could include choices such as replacing diesel trucks and other equipment with electric models, putting in rooftop solar panels or installing air filters at nearby schools or day care centers. 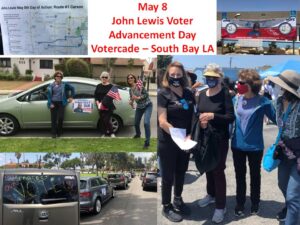 PV Dems members Ellen Gorbunoff, Carol Moeller, Ann Nye, Nancie Silver and Lynn Bommer participated in the John Lewis Advancement of Voter Rights Votercade on Saturday May 8.  The event began with a Facebook broadcast with national leadership to encourage support of S1/HR1 (the Peoples Act), HR4 (the John Lewis Voting Rights Act), and HR 51 (the Washington D.C. voting rights act). Fifty cars drove two separate routes through Torrance, Hawthorne, and Carson in the South Bay.  Other motorcades met in 35 states across the country; more than 10,000 people joined in nationally.  Next steps include a Freedom Ride through six Southern states, culminating in Washington D.C.