Hans has been a fixture in Democratic politics for decades.  He was born in Germany, grew up in Namibia, which adjoins South Africa, and for most of his working life was an aerospace engineer here in the South Bay.  Living in such disparate countries, he bore witness to governmental injustices firsthand, so it is not altogether surprising that he chose to fight for noble causes.  He has been active in our club through the presidencies of Tony Hale, Kay Jue, Connie Sullivian, myself, Lynn Bommer, Rascha Hall and Kathy Bradford.  He held the offices of Vice President as well as Precinct Captain in our club, and during some election cycles, he coordinated all the precincts here on the hill.

Almost every weekend he could be found tabling for Democratic principles at the PV Farmers Markets, and then later, biweekly at Wilson Park.  I remember a time when he collected trash at the beach, then pinned it to a trash bag and wore that to demonstrate our lack of regard for the environment.  For a while, he tried to educate us by holding weekly sessions on framing messages, based on George Lakoff’s excellent books.  Hans was very deservedly honored as Democrat of the Year by our 66th Assembly District.  Although slowed down by his beloved Annerose’s strokes and eventual death as well as his own health issues, until the lockdown he was still tabling, and even during COVID he campaigned remotely during this last Presidential race.  At a great loss for us, Hans has decided to return to his family and live in his native country.  We wish you all the best, Hans, and please know that you will be sorely missed.  Although it will be late in your new time zone, we still hope to see you at our PV Dems Zoom meetings.

After reading the above at our March 21, 2021 Zoom meeting, there were several accolades regarding Hans in chat.  One member mentioned his repeated “Dump Dana” campaigns to remove Dana Rohrabacher as our then congressman.  Another mentioned his Occupy PV efforts that began in 2011.  Modeled on the Occupy Wall Street movement, many subsequent movements like BLM and the Women’s Marches attribute their origins to the Occupy movement. 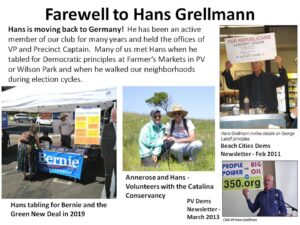