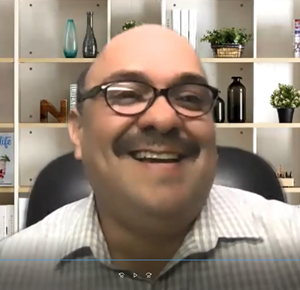 Sergio Carrillo began by thanking the volunteers who called, wrote, texted and donated during the campaign.  He claimed over 38% of phone calls made to battleground states were made by Californians, either through the California Democratic Party or through numerous grass roots organizations.  Though we will soon have a new president, Sergio expressed sadness that the current President has not conceded and has blocked the transition process by preventing the General Services Administration from dispersing funds to the Transition Team.  Sergio noted the contentious Bush vs Gore election of 2000 delayed the presidential transition by 36 days; intelligence experts felt this delay may have undermined the country’s national security.  However, despite the current President’s obstruction, the transition has begun, and some Republicans have supported it.

The Senate balance stands at 48 Democrats and 50 Republicans, highlighting the importance of the upcoming Georgia senatorial run-off elections.  There are 5 million Georgia voters; Democrats are formulating a strategy to optimize resources without inundating Georgia voters with a barrage of messages.  The pandemic poses a real threat to door-to-door volunteers who are generating support for Democratic candidates Jon Ossoff and Raphael Warnock. 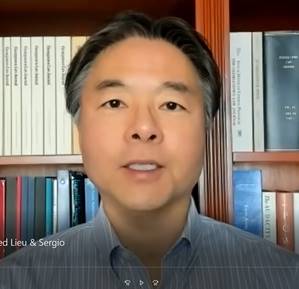 Congressman Ted Lieu, a regular Twitter user and the author of his weekly “Lieu’s Review”,  thanked Ann, Sergio and the audience for participating in the November meeting.

Congressman Lieu began by saying the presidential election was not close; Joe Biden won by 6–7 million votes and won the highest vote share of any challenger since FDR.  He flipped MI, PA [Editor’s Note: and also AZ, WI and GA] and won 306 electoral votes; the same number as Trump won in 2016.  Referring to Donald Trump, Congressman Lieu commented, “On January 20th, he is going to be escorted from the White House”.

Democrats had a net gain of one Senate seat and may win an additional two seats in Georgia.  On the House side Democrats maintained their majority but lost seats.  The Democratic Congressional Campaign Committee (DCCC) will analyze the data, especially in closely contested districts.  Congressman Lieu believed Trump turned out both the Republican and Democratic bases, but, while some Republicans rejected Trump, they remained loyal to the Republican Party in the down ballot races.  Some congressional losses were almost expected as they occurred in heavily Republican areas.

Congressman Lieu concluded the key message was that Democrats ousted an incumbent president who had used every lever of government in his re-election effort.  This is a significant accomplishment because both the President and cabinet members such as Betsy DeVos, Bill Barr, Stephen Miller, Mike Pompeo and others, will be departing.

Following Sergio Carrillo (SC) and Ted Lieu’s (TL) introductory messages, there were several audience questions.  Here are the key questions and a summary of their answers.

What are the best things we can do to help win the Georgia senate seats?

TL  Tongue in Cheek – Move to Georgia!  Reach out to voters by text and phone.  Give resources to individual campaigns.

SC  Fundraising.  Follow the guidelines for texting and phone banking which will be available soon.

Which states flipped for Biden?

Why does a SuperPAC pay four times more for television compared to an individual campaign?

TL  It has to do with the rules and regulations governing television advertising – an individual campaign pays 20-25% of what a PAC pays.

Are there plans to bring legal action on behalf of the (delayed) transition?  What happens if the GSA doesn’t release funds after the election is certified?

TL  There is no effective congressional mechanism for enforcing subpoenas.  The only method is through time consuming litigation.  One remedy is “inherent contempt” which would allow Congress to assess fines of up to $100,000 for failure to respond to a Congressional subpoena; this would require a majority-only rules change.

Will there be a COVID Relief Package before the end of the year and before Joe Biden becomes president?

TL  The House has already passed two relief bills.  In March it approved a 3.4 trillion-dollar package which the Senate and White House ignored.  The House recently approved an additional scaled-down 2.2 trillion-dollar bill which has received neither Senate nor presidential approval.  There are signs that Mitch McConnell wants a relief bill before the end of the year.

Will there be legislation to fight Climate Change, if Republicans retain the Senate majority?

TL  The incoming Biden Administration can do several things by Executive Order: rejoin the Paris Climate Accord, reverse Trump’s executive orders and put new executive orders in place.  While there is bipartisan support for renewable incentives such as solar panels and wind generation, as long as Republicans control the Senate, significant legislation is unlikely.

Will we win both Georgia Senate Seats?

TL  This is hard to predict – too many variables.  Voters tend to like divided government.

Why has there been more press coverage of Ossoff compared to Warnock?

TL  Ossoff ran before and raised a great deal of money.  A great deal more money will be spent on both campaigns.

What is your view of the National Popular Vote Interstate Compact?

TL  I support it.  Electors are awarded according to state law; currently too few states support the compact.  If the president were selected by popular vote, the just concluded presidential race would have already been called as a blow-out win for Joe Biden.

TL  I am enthusiastically neutral.

Did mail in balloting disadvantage Reps. Cisneros and Rouda?

TL  Rouda’s district is tough for Democrats under any circumstances and the opposing candidate wasn’t Rohrabacher.  Trump turned out his base.  While some voters rejected Trump, they didn’t reject the Republican Party.

SC  The Republicans had a big turnout.

How should Democrats respond to accusations of election fraud?

TL  One of the disappointments of the election was the silence of Republicans to the crazy stuff coming from Donald Trump and his enablers.  The courts have rejected Trump’s legal actions; Biden’s campaign is ignoring the Trump craziness.

SC  Biden is going forward with the transition while Trump is stoking his base.

Are you (Congressman Lieu) running for chair of the DCCC?

TL  No, I’m running for re-election as Co-chair of the Democratic Policy and Communication Committee (DPCC).  Messaging falls under the purview of this committee. [Editor’s Note: Lieu was re-elected to this committee.]

TL  Different districts received different messages from the Republicans.  In Christy Smith’s race, taxes were highlighted, while in Gil Cisneros race, one issue was the pharmaceutical stock Cisneros owned.  In Staten Island, home to many law enforcement officers, defunding the police was an issue.  To win swing districts, Democrats need to energize our base and attract independents and moderate Republicans.  We have to do both.

SC  My brothers are a good example.  One is a die-hard Republican while another is apolitical.  The latter voted for Biden yet felt that the Dems were all left wingers who want to defund the police.  The president did a great job of labeling Democrats.  In the Cuban community, Trump basically said Joe Biden was a Communist, which reminded many Floridians of Castro.  A larger percent of Latinos supported Trump in 2020 than 2016.

Should other states do what Nebraska and Maine do to select electors?

[Editor’s Note: both states use the Congressional District Method – one electoral vote goes to the winner of each congressional district while two electors go to the state winner.]  Neither Congressman Lieu nor Mr. Carrillo had an opinion.  Connie Sullivan, PV Dems 1st VP, pointed out that given the high level of gerrymandering, this is a road we don’t want to take.

How did Donald Trump win so many votes given the COVID crisis?

TL  Watch Fox News.  Many Republicans live in a different reality as described by Fox News.  The virus, though lethal, was not sufficiently lethal to convince people to endure a lockdown.  Many voters were willing to risk the disease in order to resume work.  They feel the government is overreacting, or Trump is not to blame, or that the disease is really a bad flu.

SC  Many voters, my brother included, watch Fox all the time and believe it.  The average voter sees unemployment, lost wages and disappearing jobs, rather than the loss of life due to COVID.

Both Lieu and Carrillo felt the majority of Americans believe that Trump screwed up the COVID response.

What should be our response to the rising COVID numbers?

TL  The economy won’t return to normal until we suppress the virus.  The majority of voters don’t want to get the virus.  Polling is difficult with candidates, but voters are less likely to lie about issues they care about.  Polls show that most Americans favor a mask mandate.

Are people anxious about the wave of firings within the Trump Administration?

TL  The country is seeing an angry president taking out his resentment on people he viewed as insufficiently loyal.  This is not part of a grand strategy, but more like a vendetta.

Can he (Trump) trash things to such an extent that things will be difficult for Biden?

TL  He can trash things until January 20th, then Biden can reverse many of the decisions.

What is the risk of the ACA being overturned by the Supreme Court?

TL  The entire act is unlikely to be overturned, even if one clause of the act were declared unconstitutional.

TL  This was a bizarre rant that was factually wrong.  The government cannot discriminate, but this does not infringe on a religious organization’s right to decide whom they wish to marry.  The first amendment limits the government’s ability to restrict free speech, but not an individual’s rights.

What should be done about the Supreme Court balance?

TL  The problem wasn’t that Trump nominated a justice in the last year of his presidency, but rather that the Merrick Garland nomination was held up.  It’s too early to decide what to do.

Comments on the LACDP resolution asking Sheriff Villanueva to resign.

SC  I voted against the resolution because I felt the sheriff didn’t have enough time to defend his record.  Connie Sullivan noted that the resolution calling for Sheriff Villanueva’s resignation was not passed by the LACDP.

Congressman Lieu thanked the audience and reiterated the good news.  We’ll have the first woman vice president, we’re making progress and we can look forward to a competent, compassionate administration.  A year from now we will be in a better position with COVID waning and the economy strengthening.

Sergio thanked the Congressman and the audience.  He asked us to keep up-to-date on the Georgia races and to celebrate the victory of Joe Biden and Kamala Harris.  The CA Democratic State Convention will be following new rules next year:  see ADEM article.