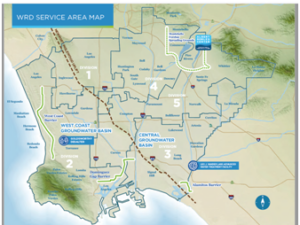 Rob Katherman, incumbent board member candidate for the Water Replenishment District (WRD) Division 2, was elected to the Board in 2004 and is Chair of the Water Resources Committee and member of the Groundwater Quality Committee.  Rob is endorsed by the LACDP, State Senator Ben Allen, LA Supervisor Janice Hahn, LA Times, and many others including our own West Basin Director, Harold Williams.  You can visit Rob’s website at http://www.katherman4wrd.com/index.php/about-rob.

Rob opened his talk providing us a summary of his background.  He’s educated as an environmental engineer with a Masters in water treatment from California State University, Long Beach, and was on the Torrance water commission for seven years.  While on the commission, Rob met the original members who created the West Basin Municipal Water District (WBMWD), which was formed to bring imported water to the South Bay when our groundwater was being contaminated by sea water intrusion.  Rob is very proud to be part of the WRD team which provides clean groundwater for four million people in our 100 square mile area.  Rob says, “Mother Nature provides half our groundwater replenishment and our job is to provide the other half of the groundwater replenishment and that groundwater supplies half of our drinking water for four million people in our service area.”

Fifteen years ago, Rob said the WRD realized our storm water was gradually decreasing over years and that climate change was having an adverse effect on our water supply.  To keep us from being dependent on imported water, WRD partnered with the WBMWD to purchase recycled water to put into the West Coast Seawater Barrier to prevent seawater intrusion.  Rob says our West Coast Seawater Barrier is free of imported water – it’s all advanced treated reclaimed water.  In WRD’s historical document, Our Road to Independence released in August 2019 in celebration of 60 years since WRD’s formation in 1959, they detail the arduous path to replenishing our groundwater without using imported water.  The photos in this article were excerpted from the WRD document.  Below the WRD’s Water Portfolio photo shows the 2004 Water Independence Now (WIN) program was a significant milestone in WRD’s path away from imported water. 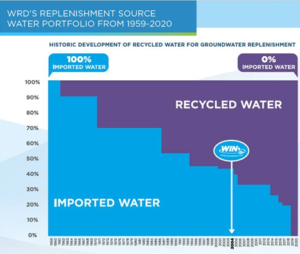 In 1960, all of the required replenishment water purchased by WRD was imported.

In 1992, West Basin Municipal Water District built the Edward C. Little Water Recycling Facility in the City of El Segundo (operational in 1995).  WRD was their first customer signing a 30 year take or pay contract to purchase 4,000 AC-ft od RO treated water or 25% of the seawater Barrier injection volume.  WRD signed subsequent agreements with WBMWD for additional recycled water as the El Segundo Plant was expanded.  About 6 years ago WRD signed the final agreement to purchase recycled water all for the barrier water injection.

WRD built a brackish water treatment plant in Torrance in 2001 and expanded it in 2018, https://www.wrd.org/content/wrd-robert-w-goldsworthy-desalter. This plant currently treats up to 5 million gallons per day which is pumped directly into the Torrance Water System.

Now, WRD is planning another brackish water treatment plant in Torrance, which will use Reverse Osmosis to treat the brackish groundwater which is a result of seawater intrusion.  Reverse Osmosis (R.O.) is the same technology used in Ocean Desalination. Ocean water contains nearly 10 times more dissolved salt than our brackish groundwater. This plant will produce 20 million gallons of recycled fresh water which can go directly to the water providers in the South Bay thus eliminating the need for imported water.  Additionally, this infusion of water will help clean up our aquifers and enable us to store locally sustainable water in the area.  Rob said the treated brackish groundwater is pumped directly into local potable water distribution systems since its source water isn’t treated sewage as is the water emanating from WBMWD’s Water Recycling Facility in El Segundo.  R.O. treated sewage requires the water to be put into a “intermediate system,” either groundwater or a reservoir for dilution and further natural treatment.  This is known as “indirect Potable” reuse.

The proposed new Torrance plant has been approved by the LA Regional Water Quality Control Board.  Rob said they’re hoping to pick a site in the next few months with the permission of the Torrance City Council and the neighborhood and then move forward to build the plant which will take a couple of years.  The extracted groundwater will have to be replaced by injecting additional water into the West Coast Barrier either by buying water reclaimed by the WBMWD using R.O., or from the LADWP Hyperion Plant directly using Membrane Bioreactor technology.  Rob says they are currently partnering with LADWP on a modeling study to inject additional Hyperion Water into the Barrier system and new injection wells for replenishment and eventually groundwater storage once the brackish water is removed.  In response to a question, Rob said WRD has to do a better job in alerting residents about the level of groundwater in the Barrier system and admitted it would be difficult to find the information on their website. 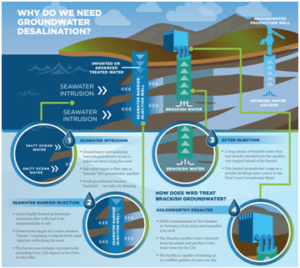 To clean up the PFAS chemicals in the groundwater [note: Per- and polyfluoroalkyl substances (PFAS) are a group of man-made chemicals that includes PFOA, PFOS, GenX, and many other chemicals], Rob said they are working to get funds through bond sales and loans to provide interest-free money to pumpers to clean up the PFAS.  “We have the technology and know what to do.”  Most of the contamination is located in the Montebello Forebay Spreading Grounds up in the Northeast part of our district.  “There is no PFAS contamination in the South Bay, at least, as of yet,” says Rob.  “We have been monitoring 300 wells in our service area and we test every month for over 100 chemicals, including PFAS.”

In closing, Rob said he would like one more term on the WRD to achieve his goal of getting the brackish water plant up and running in Torrance and then pass the baton to the next director and staff to make us completely independent of imported water here in southern California.