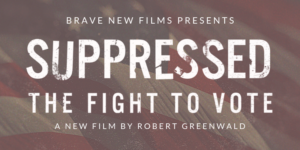 Robert Greenwald, founder of Culver City-based Brave New Films (bravenewfilms.org), presented his latest documentary short, Suppressed 2020: The Fight to Vote.  In 2013 the Supreme Court struck down a key provision of the 1965 Voting Rights Act requiring preclearance by certain jurisdictions of voting procedure changes.  The abandonment of preclearance led to a torrent of restrictions aimed at minority voting.  Using the 2018 midterm election in Georgia as a template, Suppressed 2020 summarizes in chilling detail the extent of voter suppression through the following techniques:

There are two factors making these actions indefensible:

After watching the movie, Robert Greenwald fielded questions from the audience.  He prefaced his answers with a few comments about the origin of Brave New Films (BNF), which was founded to motivate voters on the most pressing issues of the day.  It is distributed through social media and to nonprofit organizations.  Donations are welcome.

One questioner wanted to know to what extent Greenwald’s time at Antioch College influenced his success as a filmmaker.  Greenwald responded that the passion and commitment to social justice built into his campus experience contributed to the questions he asks about any project:

The filmmaker felt this approach was in alignment with the value structure he encountered as a student at Antioch.

When queried whether he would consider doing a recruitment film for Antioch, Greenwald emphasized that BNF is a social justice organization – someone would need to raise funds, but as an individual he would consider such a project.

Another individual wanted to get his take on California’s fake ballot drop boxes.  He responded by equating the fake ballot boxes to the voter suppression techniques he witnessed while making Suppressed 2020.  At times during filmmaking, Greenwald felt that he was no longer living in the United States, but rather in an authoritarian state.  This prodded him to set the goal of showing the film 2,020 times prior to the 2020 election.  Close to reaching this lofty goal, he believes the placement of unofficial ballot boxes fits into the bigger problem of systemic voter suppression.

One questioner asked how individuals can become more involved.  Greenwald emphasized everyone can participate in combating voter suppression through several actions:  joining organizations such as the ACLU or FairFight, founded by Stacy Abrams, contacting local officials, and using clips of Suppressed 2020 on social media platforms.  The key factor is finding something within one’s comfort zone and acting on that impulse.

When asked about voter suppression in 2020, the filmmaker commented that the pushback against voter suppression has been intense, as reflected in lawsuits, public pressure and the recruitment of several thousand poll watchers.  In his view, combating voter suppression is a social justice movement not unlike the Women’s Movement or the Labor Movement.

Greenwald was asked about his participation with the Lincoln Project and other anti-Trump Republican organizations.  Though not collaborating directly, he reacted as they did to Trump’s handling of both Covid-19 and the Black Lives Matter campaign.  The entry of a multitude of organizations into the anti-Trump space has allowed Brave New Films to undertake more resource-intense projects.

Greenwald encouraged club members to follow BNF by signing up online for email updates or following BNF on Facebook, Twitter, Instagram and TikTok.  BNF will soon release a documentary delving into the appointment of young, conservative judges for lifetime appointments.  Another project set for distribution in 2021 reviews the 13 million or so individuals in the incarceration system nationwide – mainly for misdemeanors.  The roots of incarceration for misdemeanors dates back to post reconstruction efforts to suppress, limit and marginalize African Americans throughout the South.  Future projects will look at structural democratic challenges such as the filibuster, the size of the Supreme Court and the role of money in politics.

When asked what he would do if Biden is elected, Greenwald felt BNF would identify key issues, fund-raise and coordinate with like-minded organizations and politicians to advocate change.  If Trump prevails, BNF would attempt to block the most egregious changes of a second Trump administration.

When asked about Proposition 25’s elimination of the cash bail system, Greenwald expressed optimism it would pass.