At our Sept 20 meeting, representatives of the League of Women Voters (LWV) – Nancy Mahr, Arlene Block, Katy Watkin, Ann Nye, Janet MacLeod – presented the pros and cons of each of the twelve propositions on the November 3, 2020 ballot.  You can view their presentations in the video below. 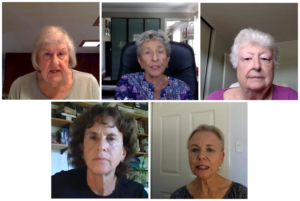 The LWV’s VotersEdge website, https://votersedge.org/en/ca/elections/2020/11/03/measures, provides the background details for each of the CA Propositions, includes the supporters and opponents, how much money was raised, and who were the biggest contributors.  Understanding the background on why or how the proposition got on the ballot and following the money on who’s backing the proposition should be helpful in deciding your vote.  For example, Proposition 25, which replaces the state’s current money bail system with a system based on public safety risk, is supported by the Governor, CA legislature and a wide coalition of community groups and is opposed almost entirely by the bail industry.  Here are other links to help guide your decisions:

The Ca Democratic Party (CADEM) endorsements are at:  www.cadem.org/vote/endorsements/

Below are the CADEM and LACDP proposition endorsements:

Here are the Pros and Cons for Measure J that LWV planned to present, but we ran out of time:

Measure J – Re-Imagine Los Angeles County, authored by Supervisor Sheila Kuehl, was placed on the ballot by the LA County Board of Supervisors in a 4 to 1 vote.  This measure would amend the County Charter to require that 10% of locally raised money (about $400 million annually) would be an automatic budget allocation each year dedicated to Community Investment and Alternatives to Incarceration – including housing, mental health programs, jail diversion, employment opportunities and social services.  If approved, this measure would be phased in from July 2021 through June 2024.  If the county were ever in a financial emergency, the board could, through a four-fifths vote, reduce how much money it would allocate under the measure.

Pro:  Supervisors and a coalition of almost 100 community based non-profits – among them, Black Lives Matter Los Angeles and the United Way of Greater L.A.

Recently, on Sept 28, the LA Times Editorial Board changed their misgivings about Measure J and provided an endorsement and reasons to vote for Measure J — Yes on Measure J. Shift L.A. County spending from punishment to treatment.  PV Dems has invited a speaker from Re-Imagine LA to speak at our October 18 monthly meeting.

Here are some of the questions and answers and comments made after some of the proposition presentations:

Connie Sullivan:  In 2004 the Bush administration wasn’t funding stem cell research – what is the case today?

Connie Sullivan:  We heard the county assessor, Jeffrey Prang, speak on this at the Beach Cities Dems meeting.  He is not for this and says that the claim that Disneyland hasn’t been reassessed all these years isn’t true.  Disneyland has made lots of improvements and has been reassessed for all those improvements.  Jeff says it’s not going to bring in the amount of money people think and will inundate his office and he’s not going to be able to do the assessments quickly enough to increase revenues.

Carol Moeller:  They are reassessed for the improvement, but not the entire property.  The property itself, the land value, which is the most valuable in CA, does not get reassessed right now.

From Chat:  Will apartment houses and rental houses taxes be increased?

Arlene Block:  If the landlord is a big landlord and owns lots of properties, he will be facing increased taxes.

Nancy Mahr:  It does not increase taxes on residential properties whether they are multiple family or single family units.

Nancy Mahr:  This measure does give some benefits based on the hours worked (like an hourly wage, some overtime, a stipend towards health insurance, plus the company would pay for the fuel and give them a stipend towards car care) where the gig workers had no benefits before, but they would be exempted (or denied) from workman’s compensation.

Judge Tom Long:  I wholeheartedly endorse Proposition 25.  CA and the United States as a whole are one of the few places in this world that still rely on cash bail.  The cash bail system is horrible in administering justice equally and fairly to everybody.  At any given time, half the people in LA County jails are being held pending trial having not been convicted of anything.  The question in part that is being asked by this proposition is whether do you trust judges to make judgments on whether to release people and to make them based on criteria other than wealth or if you’d rather have the continuing system where private for-profit bail bondsman essentially make the decision based largely on issues like credit rating and the premium that you can pay.  The cash bail system is broken.  It is used by District Attorneys to coerce guilty pleas.  It cripples people who are trying to recover themselves and jails people for non-violent crimes frequently.  It is a horribly broken system, desperately in need of repair.  I strongly urge you to vote FOR Proposition 25.