By Tex Yamada and Ann Nye —

Leonora Camner, Managing Director of Abundant Housing LA (AHLA), an organization that advocates affordable housing and seeks resolution of the homelessness issue, opened her talk by providing a historical background of race relations affecting the housing landscape in Los Angeles.  Using documents and maps dating back as far back as the 1920s and 30s, Camner’s presentation illustrated the use of racist housing practices, such as Race Restrictions and Redlining in print advertising and record keeping to recruit certain ethnic groups at the exclusion of other ethnicities.   Redlining was the practice of denying home loans to nonwhite ethnicities; effectively banning financial assistance to communities of color.

“Exclusionary Zoning,” says Camner, was another housing practice which promoted single-family only zoning laws, enacted in Los Angeles during the 1920’s, and limited housing construction to single-family homes, which were only more affordable to wealthier whites.  Nonwhite ethnicities were more associated with multi-family homes and buildings, characterized as lower income.

According to Camner, one of the underlying reasons for the housing crisis shortage is the decrease in housing units built in the City of Los Angeles.  She illustrated this trend with a graph (shown below) showing housing units built by decade over the last 75 years.  The decades of the 1950s, 60s, and 70s could be called the “boom” era with significant declining numbers since the 1980s.

On the following graph, Camner illustrated a steady rise of the homeless count from 39,414 in 2011 to 58,936 in 2019.  Although the graph did not show it, she indicated a 12% increase in 2020, which equates to about 7,072, or a cumulative count of approximately 66,008.  The 12% increase is pre-pandemic, said Camner, who added, “In this recession that we’re in now, homelessness is absolutely going to go up.  We’re really on a trajectory for the acceleration of homelessness after this crisis.” 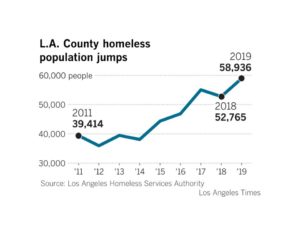 One reason affordable housing is hard to implement, Camner explained, is that Proposition 13 with its limits on taxation (favorable to landowners), helps keep land values up.  The other is structural issues, says Camner, “that prevent housing from being built at all, making existing housing very expensive.”  In the end, fewer homes are built, creating a housing scarcity, and home values remain high (in theory).  In fact, Camner cited one example from 2017 to 2018, where total assessed property value in Los Angeles County increased by $100 billion.

Citing report findings from the Barack Obama Housing Development Toolkit (September 2016), Camner reported that we don’t have more home construction in high-growth metropolitan areas due to local opposition to housing developments.  The report findings stated, “The accumulation of such local barriers—including zoning, other land use regulations, and lengthy development approval processes—has reduced the ability of many housing markets to respond to growing demand.”

To address the housing crisis, Camner advocated for mixed-income housing as one potential development plan.  Mixed-income housing is broadly defined as including apartments, town homes, and/or single-family homes for people with a range of income levels.  Camner cited the example of Paseo Marina (redevelopment of the Marina Marketplace in Del Rey), as a project that did not pan out, but could have potentially helped ease the housing crisis in LA County.  Camner said, “This is an example of a mixed-income project which would have created 700 homes and it would have included over 60 subsidized affordable homes for people of lower income.”  “It’s projects like these getting killed all over LA County, that would start to chip away at our housing crisis.”

During the Question and Answer period, concerns were raised of maintaining the delicate balance of protecting self-interests of home ownership while simultaneously showing support of affordable housing, including high density development, in LA County.  Camner responded that she thinks “there are a lot of really tangible, immediate benefits to neighborhoods if we support more housing.”  She pointed to the part in her presentation where she showed a multi-family dwelling a few blocks from a single-family home in her neighborhood and asked “why can’t there be more of that”?  In multi-family housing projects, Camner said, “we get more vibrant commercial areas, we get less traffic.  There’s a reason that we all enjoy being tourists in these cities that have multi-family housing and have mixed commercial and residential areas because there is a lot of livability there.”  Camner concluded in saying she is, “hopeful that neighborhoods will take it upon themselves to embrace these changes.”