This morning, the PVE Police Department sent out an email saying, ” A protest has been planned and scheduled for noon today in front of the police department. We anticipate a peaceful demonstration; nevertheless, to assure it, there will be a strong police presence.”

Provided a location and time, I decided to check out the protest.  I arrived early and saw young people and families with children walking up with their signs to the park next to Malaga Cove plaza (PVDW and Via Corta).  One woman supplied a large pad of paper and a marker for folks to make a sign if they didn’t have one – I made a sign.  One young man brought baked cookies.  Others brought bottles of water to give out.  Around noon as folks were still walking in, several policeman walked over to the growing crowd and introduced themselves, welcomed our protest and then left.  I was pleasantly surprised at how welcoming they were.  A sheriff’s contingent was also present in front of the police department.

A couple of hundred demonstrators joined the protest.  Everyone was warm, talkative, and sharing why they were there.  Some met up with school friends who heard about it on social media and others wanted to be a part of the movement exposing the systemic injustice that caused the murder of George Floyd and others before him. 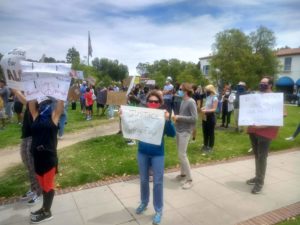 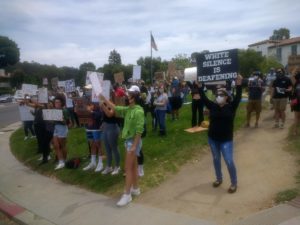 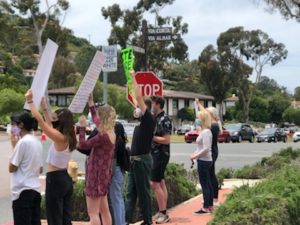 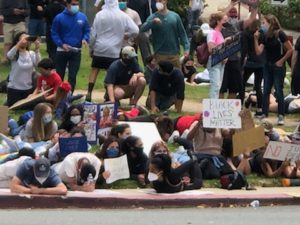 Later in the day, the PVE Police Department sent out this message, “Our officers heard the message from the peaceful protesters today and knelt with them to symbolize our humanity. We are thankful all remained peaceful and are proud of our officers for protecting PVE and the people’s freedom of speech and assembly. We also thank LASD and Redondo Beach PD for providing mutual aid.”

We all took a knee at the rally – I didn’t realize the officers took a knee, too.  Colin Kaepernick would have been proud.