An Update From Senator Dianne Feinstein

“According to the Southern Poverty Law Center, Patriot Prayer attracts white nationalists and other hate groups to its rallies with the intent to provoke unrest between those groups and counter-protesters. I am alarmed at the prospect that Crissy Field will be used as a venue for Patriot Prayer’s incitement, hate, and intimidation.” To read the full statement, CLICK HERE.

“Violent acts of hate and bigotry have no place in America. The attacks we are witnessing in Charlottesville are completely unacceptable and must not be allowed to continue. Violence like this will solve nothing and will only beget more violence and sow more division.” To read the full statement, CLICK HERE.

“This is a travesty, plain and simple, and evidence that Donald Trump’s immigration policy is nothing more than a hateful deportation program targeting law-abiding families. It’s shameful and stands against the very ideals upon which this country was founded.” To read the full statement, CLICK HERE. 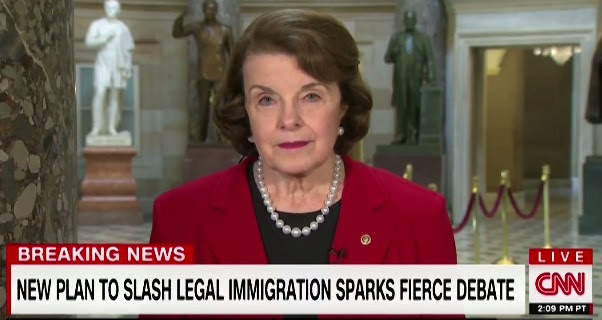 Feinstein on “The Situation Room with Wolf Blitzer” (August 2, 2017)

Senator Feinstein spoke about the president’s immigration bill, tension with North Korea and sanctions against Russia. To watch the full interview, CLICK HERE.

“The immigration bill unveiled today by the White House betrays our country’s values. Our country shouldn’t tell immigrants who perform the most thankless jobs in our society that they can work here but they can’t build lives here. That’s not what this country is all about.” To read the full statement, CLICK HERE.

THE BATTLE TO SAVE HEALTH CARE

“Four failed bills and scathing reports from the Congressional Budget Office should finally convince Republicans to take the lock off of one-party control of health care.” To read the full op-ed, CLICK HERE.

“I am greatly concerned that if the federal government does not fulfill its duty in making these payments, it will cause steep increases in premiums and further push insurers out of the market. According to Covered California, halting the cost-sharing reduction payments would result in an additional 12.4 percent increase for Silver level plans in California.” To read the full letter to the president, CLICK HERE.

“This failed vote on the latest Republican bill should finally break the fever and convince every senator that the only path forward on health care is to scrap their repeal efforts and work with Democrats in an open process to improve the Affordable Care Act.” To read the full statement, CLICK HERE.

“Democrats are committed to improving the Affordable Care Act. One way to do that is by giving the federal government additional authority to block unreasonable premium increases. If Republicans were serious about addressing affordability, they would work with us on proposals like this one that will help families across the country.” To see the full press release, CLICK HERE.

The devastating effects proposed Medicaid cuts would have on children

“The latest Republican attempt to repeal the Affordable Care Act may have failed, but their long-term goal is clear: reduce coverage, remove consumer safeguards and, most importantly, gut Medicaid.” To read the full op-ed, CLICK HERE.

“Up to this point, this administration has rejected the fact that human activity is driving climate change. This willful ignorance has made it almost impossible to address the risks highlighted in this report. Burying this report and refusing to act on its conclusions would be a dereliction of duty.” To read the full statement,CLICK HERE.

“What this report is telling us is that unprecedented changes to the entire Lake Tahoe Basin are now taking place. This is a clarion call-to-action for all who love this lake, the Jewel of the Sierra.” To read the full statement, CLICK HERE.

“California has once again shown the world that we have the strength and courage to lead the charge on climate change. California’s success should inspire people throughout the world to realize that victory on climate change is still possible.” To read the full statement, CLICK HERE.

“While Justice Department regulations already state that the president can’t fire a special counsel, passage of this bill by both chambers of Congress, regardless of whether or not the president signs it, would send a clear message to President Trump that any effort to do so won’t be tolerated.” To read the full statement,CLICK HERE.

Senators Call on Attorney General to Condemn Excessive Use of Force (August 3, 2017)

“We strongly encourage the Department of Justice to join the chorus of law enforcement organizations in making clear that excessive use of force is unacceptable. The men and women who protect our communities on a daily basis deserve your support.” To see the press release, CLICK HERE.

“The decision by the White House to publish the emails commenting on the Commission without redacting personal information demonstrates, at best, a lack of sensitivity to and simple disregard for the very concerns raised in many of emails.” To see the press release, CLICK HERE.

“It’s nothing more than cruel to tell the 15,000 transgender individuals currently serving honorably that they are no longer wanted just because of who they are. Democrats will do all we can to change this discriminatory policy.” To read the full statement, CLICK HERE.

“Senate Democrats are unveiling an ambitious economic agenda that looks out for everyday Americans, too many of whom are struggling to make ends meet. This plan works for them by creating jobs and raising wages while lowering costs for consumers, families and small businesses.” To read the full statement, CLICK HERE.

More than 70 members of Congress introduced the Refund Equality Act, a bill to ensure that legally-married same-sex couples are permitted to file amended tax returns back to the date of their marriage. To see the press release, CLICK HERE.

“Diplomacy is the only path to stop Kim Jong Un from obtaining a nuclear weapon capable of striking the United States. Unfortunately, as President Trump grapples with the North Korean threat, he seems to have forgotten that same lesson we learned with Iran.” To read the full op-ed, CLICK HERE.