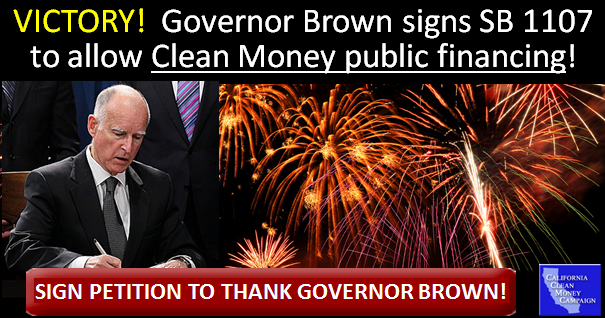 Join the California Clean Money Action Fund and our 150,000+ supporters who are leading the way against Big Money.

This is a historic step for our democracy.  We’ve been fighting for years to remove the ancient 1988 ban on public financing.  Such citizen-funded election systems are the only way to get politicians out of the pay-to-play fundraising game.

Governor Brown responded after receiving an amazing 56,854 signatures from Californians urging him to sign.  More than 1,700 people called — many thanks to our phonebanking volunteers.  Thousands more tweeted or shared on Facebook.

We owe this victory to all of you who acted — thank you!

Not only that, but Governor Brown also signed one of our other top priorities, SB 1349, the bill to increase transparency and disclosure by modernizing the Secretary of State’s outmoded campaign disclosure website, one of the two key parts of Jim Heerwagen’s Voters’ Right to Know Act that many of you worked on with us earlier this year.

We’ve made so much progress that both SB 1107 and SB 1349 were bipartisan victories!
SB 1349, by Senator Bob Hertzberg (D-Van Nuys), passed unanimously because it had support from good government, labor, and business organizations.  Everybody wanted improved online disclosure.

But SB 1107 was different, because citizen-funded elections will take power away from special interests.

SB 1107 author Senator Ben Allen (D-Redondo Beach) led the way.  As he said, “Californians are demanding greater accountability from their elected officials, and rightfully so.  Anything we can do to empower communities to reduce the influence of money in campaigns is a good thing.”

But the pressure to vote No on SB 1107 was intense.  Republican Senators Anthony Canella (R-Ceres) andBob Huff (R-Brea) and Assemblymembers Catharine Baker (R-San Ramon), Ling Ling Chang (R-Brea), and David Hadley (R-Torrance) all deserve great credit for standing up for the voices of regular voters against special interests, as do all the Democrats who voted Yes.

As Assemblymember Hadley said, “The undue influence of big money special interests in politics isn’t a partisan issue.  I voted for SB 1107 to give cities and counties the local control they need to develop campaign finance systems that work for them, and look forward to working with the California Clean Money Campaign and others to explore carefully-crafted citizens-funded election systems to strengthen election accountability.”

This was just a first step towards citizen-funded elections.  Now that SB 1107 allows them to do so, each city, county, and the state will still need to pass their own public financing systems, tailored towards their own needs.  But SB 1107’s passage was a crucial and historic step, and it wouldn’t have happened without the actions of thousands of Clean Money supporters like you.

Our job addressing the problems of money in politics isn’t done.  Join as a member of California Clean Money today!