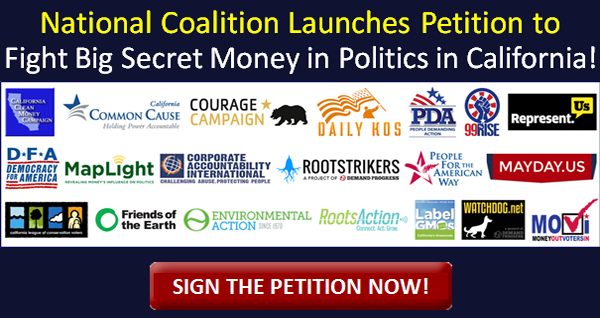 Join national coalition demanding the California legislature pass bills against Big Secret Money!
In just three days, more than 4,000 Clean Money supporters like you signed the new national coalition petition demanding the California legislature pass two powerful bills against Big Secret Money!  We’re pressing on so we can do our part in the coalition by getting at least 10,000signers — and the coalition reaches at least 100,000!


Why is such a big coalition — with some of the largest reform and activist groups in the country, not just California —  petitioning California to pass our two campaign reform bills, AB 700 and SB 1107?  Because our bills will strike the strongest blow yet against the unlimited secret money unleashed by Citizens United.  And if California leads, the rest of the nation will follow.

AB 700, the California DISCLOSE Act, authored by Assemblymembers Jimmy Gomez and Marc Levine and sponsored by the California Clean Money Campaign, will strike a crippling blow against secret money.  It will require ballot measure ads and ads by Super PACs to clearly and prominently show their top three true funders on the ads themselves — a first in the nation.  It will finally stop billionaires and other special interests from deceiving voters by hiding behind front groups.

SB 1107, authored by Senator Ben Allen and co-sponsored by California Money Campaign and California Common Cause, will remove California’s archaic ban on public financing of campaigns.  This will allow all California cities, counties, and the state itself to explore voluntary public financing systems to get politicians out of the fundraising game and make them accountable to everyday Californians.

Sign the petition to the California Legislature and Governor Brown:  Fight big secret money in politics by passing AB 700 and SB 1107!

AB 700 and SB 1107 are approaching their final hurdles.  AB 700 passed the Assembly in an overwhelming vote of 60-15 with a record 9 Republicans joining all Democrats.  SB 1107 passed the Senate in a bipartisan vote of 26-12 with one Republican joining 25 Democrats.  Both have since passed their first committee in the other house, and now face a second committee followed by a full floor vote.

Both AB 700 and SB 1107 have gotten this far because of tens of thousands of Californians like you emailing and calling their legislators.  But special interests won’t give up control easily, so we must increase the pressure and apply it until the Governor signs these bills!

The power of our bills is why one of the strongest national coalitions ever for a state reform bill is petitioning the California legislature and Governor Brown to pass AB 700 and SB 1107:

Here’s what the petition to the California legislature and Governor Brown says:

“Due to the devastating Citizens United Supreme Court decision, astounding amounts of hidden special-interest money in elections continues to threaten our democracy.

Please lead the nation by passing two game-changing campaign reform bills: AB 700, the California DISCLOSE Act, which makes it illegal for political ads to mislead voters about who’s paying for them, and SB 1107, which allows public financing of campaigns so elected officials are accountable to voters, not Big Money donors.”

Thank you for standing with the California Clean Money Action Fund in the fight for fair elections.  Please stay tuned for more ways you can help pass the California DISCLOSE Act and SB 1107.

Together, we will create a democracy that is truly of, by, and for the people.